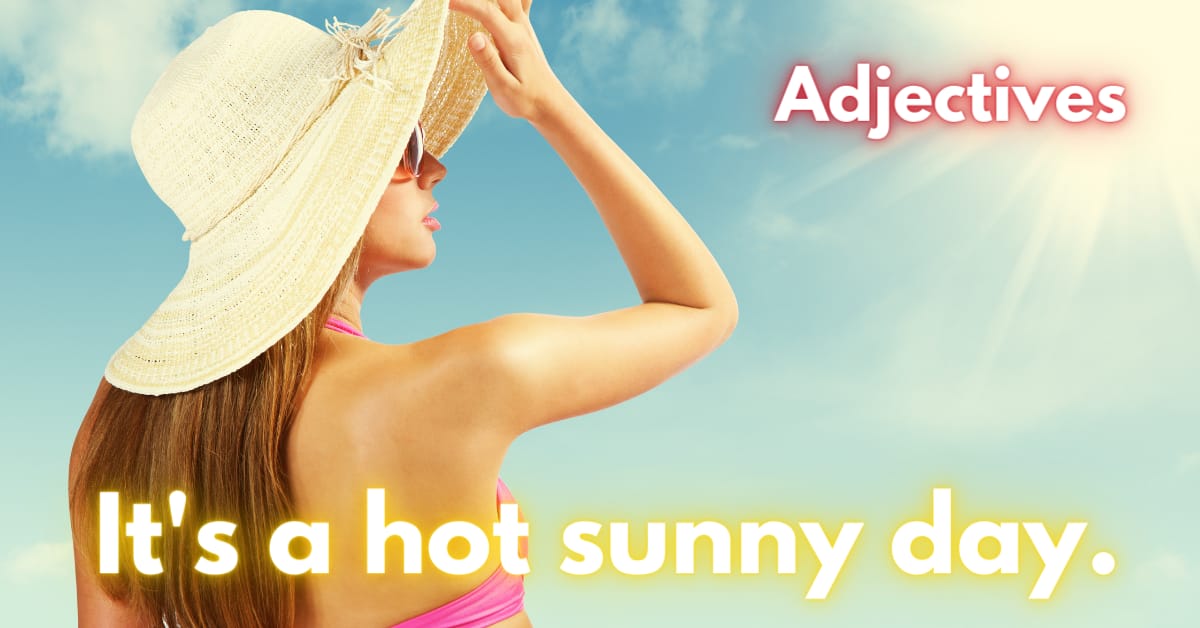 Adjectives are words that are used to tell us what attribute (quality, quantity or characteristic) a noun (someone or something) has. They can be used to describe feelings, appearance or preferences.

An adjective can come before a noun or after a noun.

✅Your shoes are new. ( noun + adjective)

✅They are good friends. (adjective + noun)

Some adjectives are used more than others. Here are a few commonly used adjectives:

⛅Adjectives can be used to describe the weather:

When two adjectives are used, we usually:

Sometimes three or more adjectives are placed in front of a noun. It is fairly unusual.

When three or more adjectives are used, we should use them in this order:

Adjectives in front of nouns

Comparative adjectives are used in sentences where two nouns are compared. They describe a noun by comparing it to another noun.

✅A tiger is bigger than a dog.

✅A rocket is faster than an aeroplane.

✅Peter is older than his sister.

✅One year ago, Peter and John were the same height. Now, Peter is taller.

✅We need a bigger TV.

✅His body became stronger and stronger.

✅They were becoming more and more excited.

✅Instead of slowing down, she was running faster and faster.

✅The bigger the better.

✅The more you exercise, the stronger you become.

✅The further they went, the colder it got.

Superlative adjectives are used to describe nouns by comparing them to two or more nouns to the highest or lowest degree.

✅This is the fastest car.

✅Mount Everest is the highest mountain in the world.

✅It’s the best film I have ever seen.

✅Jane is the youngest child in the class.


How to form comparative and superlative adjectives

The adjectives good, bad and far have irregular comparatives and superlatives.

Active: he likes to play sports or do physical things.
Bright: he is intelligent.
Cunning: he uses his intelligence secretly/mysteriously to get what he wants.
Diligent: he is hardworking.
Extroverted: he is very outgoing. He likes to be the centre of attention.
Funny: he makes people laugh.
Generous: he likes to ‘give’ to help others.
Honest: he tells the truth.
Imaginative: he has a good imagination.
Jealous: (negative) he wants what other people have. He doesn’t like others to succeed
Kind: nice, gentle and helpful
Lazy: (negative) he doesn’t like to work or exercise. He’s happy doing nothing.
Moody: (negative) he often becomes angry and unfriendly because he is unhappy.
Naughty: (negative): usually for children) his behaviour is bad.
Optimistic: he is a positive person and positive about the future.
Pessimistic: he is a negative person. He thinks things will end badly. The opposite of optimistic.
Quiet: He doesn’t say much. He prefers to listen.
Rude: (negative) he is not polite and he offends people.
Sensible: he has good common sense and judgment.
Thoughtful: he carefully thinks about other people and how to help them.
Upbeat: he is positive and in a good mood.
Violent: (negative) he will hurt you. He is aggressive…so be careful!
Wonderful: he is great!
Xenophobic: he dislikes people from foreign countries. He is racist.
Youthful: he is young at heart.
Zany: he is a little crazy but in a fun way.

🙋 Learn how to use the present perfect simple tense.